Well after much deliberating AND Blizzard offering a 25% discount on realm transfers I managed to get all my girls across to Earthen Ring yesterday and also my guild Dark Shadow Elites (btw no discount on guild transfers).
I have so many ties to DSE - from when I first started playing the game nearly 8 years ago that I didn't want to keep it on a server where I wouldn't go back to. I feel alot better about it being here on ER with me and I had a few friends / guildies tell me they wanted to stay in DSE so have moved across.
It's really hard starting fresh on a new server, no matter how many wonderful people who you know are there. I feel good to be able to give me friends a place ... a social place for them to play, one that they're used to and don't feel like they're having to start from scratch.
I feel at home now that everyone is where they should be :)
Posted by Unknown at 7:32 AM 1 comment:

Now that I am getting settled on Earthen Ring, the time has come to roll another Iron Man Toon.
I once again rolled a Warlock however instead of Undead I have decided to try an Orc - mostly chose this as I have never levelled one beyond mid 30's and it's nice to change things around.

She is now Level 8 and I have decided to stay questing on Kalimdor this time around - no swapping continents.
The main things I must remember is to keep quests at a green level and to do some grinding on mobs that are green. I need to be very careful of yellow quests and any that may turn into a vehicle quest - avoid at all costs! 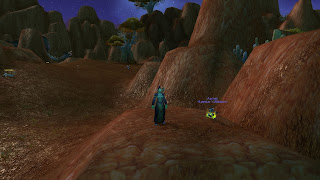 So to use the words (again) of Whitesnake's epic song - Here I Go Again :-


An' here I go again on my own
Goin' down the only road I've ever known,
Like a drifter I was born to walk alone
An' I've made up my mind
I ain't wasting no more time

Posted by Unknown at 2:19 PM No comments:

Times They Are A Changing!

Well alot has happened since I've last sat down to write, so let's start at the beginning.

I had been feeling very unhappy on Dreadmaul for quite some time due to various reasons. After alot of deliberating - about costs, namings for my girls and leaving my guild - DSE  that I've run for nearly 6 years, I decided I needed to be happy again about logging into a server where people were friendly and supportive and where I had a community that I could embrace. So I took my trusty credit card and logged into Battlenet.com and set the wheels in motion to transfer my Warlock and my Priest across to Earthen Ring.

Now one of the biggest hurdles I've always had about transferring has been getting the names for my girls. I have been known as Leeta in gaming for 8 years and I wanted to keep my Warlock as that spelling in particular. However Leeta and Atil (Lita spelt backwards) names were already taken so I sent Blizzard in game mail a few days before transferring to see if there was any chance they would release the names - as both toons on Earthen Ring hadn't been played for some time. One is a Level 55 DK and the other is a Level 16 Priest.
Now I really thought I had a good case to put forth however the reply back I got made me think there has to be a better way for Blizzard to allow for people to request and release names. Basically the reply said that as the account was still active, even though those toons weren't being played, they could not release the names.
Now I completely understand that - however it got me thinking as to why do we not have a system that allows Blizzard to contact said account owner on my behalf and kindly ask them if they would ever play those toons again and if not then Blizzard will release the names? Or some type of interaction by Blizzard to see if the account owner would release the names. I know if Blizzard contacted me regarding a toon I had made years ago and no longer played regarding releasing a name, I'd be completely OK with it.

Anyway I digress - so after all that I had to find a new name/version of Leeta and Atil that I would be happy with. So in the end I decided to go with the spellings of Leetar and Attil. It is the best I could do however I think I will just have to check with Blizzard regularly and see if anything changes regarding the release of names :)

So I transferred my girls across and joined AIE. I am now feeling so much happier - I am on a great server with alot of my WoW friends and joined an amazing guild and wonderful community. I will be bringing a few more toons across and will join them to either AIE and Clan of Darkness. The environment and culture on Earthen Ring is so rich with so many amazing people - I feel very lucky to have some wonderful WoW friends there that I can play with.

I have decided that I need to be more active in this amazing WoW and Gaming community we have. So even though it's all baby steps at the moment I will see where things head and am excited in both my in game journey I now take with a new guild and new server and the out-of-game journey of getting involved in the community. Lots of ideas and possibilities, so we shall see where it goes :)
Posted by Unknown at 7:22 AM No comments:

Last night I started my third Iron Man Toon and was levelling once again through Tirisfal Glades when tradegy struck ... AGAIN!!! I died to an Level 11 Elite Bat called Ressan the Needler.
I was Level 7!

So once again I stripped my toon and deleted her.

Now many of you are probably thinking this is going to be it! Alas I do not give up that easy :) So once again I roll another Undead Warlock called Leetaa.

In the words of Whitesnake from "Here I Go Again"
"An' here I go again on my own
Goin' down the only road I've ever known,
Like a drifter I was born to walk alone
An' I've made up my mind,
I ain't wasting no more time"﻿
Posted by Unknown at 11:11 AM No comments:

I decided after a few weeks of not playing my Iron Man Toon that today I felt focused and ready to level her from 36 towards 40. I have been questing in Desolace making sure that any quest I was doing was green in colour so it would not be too difficult to handle.
I reached Level 37 and headed over to Mannoroc Coven to complete some quests when tradegy struck! I died! I was attempting to do the quest Jugkar's Undoing when I noticed I was losing health and by the time I realised it was too late. I stared at the screen for a few seconds then burst out laughing. Oh well at least I know NOT to do that quest now! 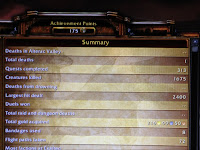 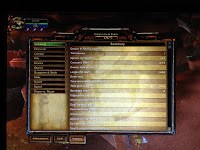 So I ran back to her body, rezzed and hearthed back to Orgrimmar. I stripped her and cleaned out her bank and then (for the second time) deleted her. 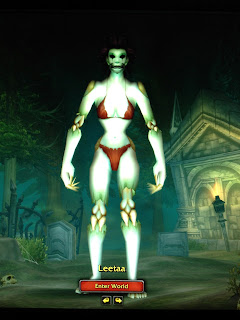 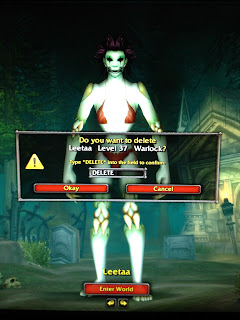 I then created my third Iron Man Toon - Leetaa an Undead Warlock.
﻿ 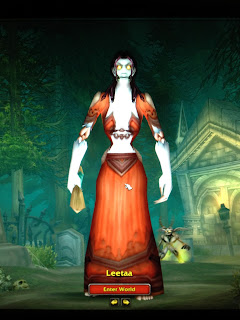 I was extremely excited to see her Imp is called Karpit! Made me laugh :) 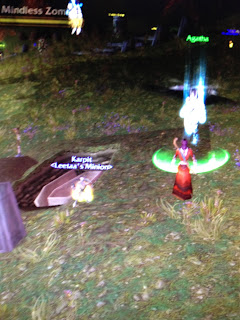 Well here I go once more attempting to level an Iron Man Toon.
Posted by Unknown at 8:38 PM No comments:

Last week I started looking around for a new set to Transmog.

My favourite sites I use are listed below (and in no particular order as all are awesome sources for information) :-

I found a Nemesis recolour here http://wowroleplaygear.com/2011/05/03/nemesis-recolor/ and have based my look from this set.

Here is the list of items I've used to achieve my look :-

I did all dungeons in Heroic Mode and the final piece dropped on my 8th run of The Botanica. Drop rates for the 7 pieces range from 14% to 19% - therefore over 8 days I managed to obtain the 7 pieces.

I am loving this look :)

One of my favourite things to do while travelling around Azeroth is to take screenshots that show the wonderful world that I have come to love over the past 7 years. Here are a few pictures I've taken this year.

Posted by Unknown at 9:25 PM No comments: